There are no words to describe last night, or even the last few days. I’m in a different dimension, experiencing San Francisco at the finest. That’s the only way I can describe in words what my last few days have been.

Saturday was a book release night. Adobe Books Gallery was hosting an artist Chris Johanson. It was an event, which brought up together an old school San Francisco crowd. Every single person has an own personality expressed through all – inside & out. Plus there was a live band. Imagine 20 square meters space and a punk band there. It was loud. Let me tell you it was LOUD! Boom!! After party and all of that was at the witch house. I’m not going bord you with the details, it was just magical experience let me tell you that!

Last night though we have crossed the bridge again in order to go to Oakland. Me and Nara picked up Christopher first, then Scot with one t and went towards the Downtown to find a girl called Brie. Totally by chance we’ve noticed her on the sidewalk skateboarding to our meeting point. It was already bizarre. Like a feeling of adventure, and something good about to happen. We have passed Giants stadium and drove on the bridge. Magical white bridge taking us to what might be described by some as a Wonderland. We have ended up in the place called Bordello on 12th street East.

From the outside there was nothing special. Just a small car park, yellow nice, high fence and the green doors. Brie was our recommendation. She was our steward for the night. It’s a place where you cannot just pop in, you need someone to recommend you to the owner George. Someone who he knows, or met before. Don’t worry I can be your steward now:)

First, I did not know what to think. It was scary, but generally I’m full of fears so nothing new. I’m a person who had a trauma after watching Gremlins when she was 15. I don’t do horror movie, I don’t do any scary things as I’m simply terrified of feeling to be scared. What’s the point am I asking? Completely don’t understand why it has become an entertainment. It’s like there would be a “stress club” where you pay 10 bucks for 1,5 hour session of maximum stress. For me it’s the same thing. Your body react in a similar way. Why would you put yourself through that?:)

Anyway that’s not the point here.

Bordello was for me like a scary house. The one you see at the amusement park. Fucking scary house with me trapped in it! I’ve smoked so that has intensified the feeling even more. The first room was like a cheese bar kind of place. Dark, red light, couple people, a pretty blond host called Maria, some instruments you could play on, quite night with not much going on. It’s a private own 2 floor house that used to be brothel. In fact it has a massive history, but more about it later.

I still did not know what to think, and felt far away from being safe. No creepy feeling, just totally out of my comfort zone, pushing myself to the maximum of my abilities to deal with one of my biggest fears of being scared.

We went outside for a cigarette and the owner himself has appeared. Gorge is one of the kind, that’s for sure. He looked like a guy who could be a friend with Elvis Presley, still stucked in that era. One kind of person, no gimmicks, just him. He was chatting with Nara about her movies, an inspiration behind and the vision for the next one. She wants to do a screening of her next movie in that space. I’m exciting for her.

Gorge has offered us a tour, so all of us went with him. The house is enormous, it’s a mansion. It’s a labyrinth Winchester House style, where an each room has a couple ways to get in and out. Last night the light was off. Apparently it’s been quite for a while there. It was kept dark so Gorge had a torch light with him. We have entered the first room and I have freaked out inside. Fuck! There was this massive brown bear with a Barbie doll in his mouth. Again, I repeat I don’t do any scary fancy things. I don’t do an amusement parks to be fear for fun. It’s not my scene so imagine how I felt in that dark room! Dark, strange with the dead animal holding a plastic doll. CreepY!! I run out a big time to have a cigarette with Brie. I could not put myself through that voluntarily. Oh no!

I’ve chatted with her about her art, what she does or not doing, about this place. In the meantime the guys came back all excited about the place. Christopher monkey-lion soul was so soft and carry towards me. Brie has offered a tour herself. I’ve asked Chris to come. I really wanted to experience the place and overcome my fear. As Brie said it’s a one life time opportunity to be in a place like this. It’s a miracle that places like this still exist, so we went.

It was ok through the first room. This time it felt a bit familiar so safe, but then darkness hit me again.  Just a torch and the light somewhere in the background, lots of small stairs and lots of everything. Brie, bless her, started to put the light on seeing the panic in my eyes. Believe me I was struggling a lot! so out of my safe place, but I did carry on. Curiosity and the sense of adventure was much stronger. Plus my gut feeling was saying it’s ok, so I followed it.

I don’t remember if it was the next room and one after but we have entered the room which was like a cabaret style ballroom. There was a bar. An orginal wooden bar from 1870 wow! Piece of art itself. All the original futures where there. There was a picture of a boy and girl on a wall. As it turns out later it was Jack London with his soulmate and future wife Chairman. Yes, the bar was a place where Jack London would regularly hang out. He was one of the regulars. wow! What a privilege to be there.

Then we started the game again. Small corridors, stairs, no order, labyrinth with just everything right in my face. Mirrors, pictures on the walls & ceilings, plastic mannequins, place full of things. There was a bathroom behind the steel grating, probably an old cell to keep prisioners. I was petrified again. Each time we had to go to the next room Brie would ensure me that there is a light, and there is something exciting to see there. Excitement was the only thing keep me going, and away from the heart attack. We ended up in a tree house like corridor, with low ceiling, another bar, some rooms full of mattress, jungle a real jungle. I run away at this point. It was enough for me. I had enough. I went down myself and bump into George.

He told me the history of the place, how he became the owner. Also, the story from late 1850 when this house was the first/last bar for people who arrived to California for Gold Rush. Some of them will come over to have a drink and….when unconscious will be kidnapped to served as sailors on the ships leaving San Francisco. The common destination of these ships with abducted crews would be Shanghai and that’s the origin of the verb  “to shanghai”. That explained the cell in the basement:)

Amazing just amazing place. As someone describe “Underground at its deepest” According to Wikipedia In the early 1990s it was also the home to San Francisco’s most wild underground party and rave. I can imagine this no problem. They called it there Mr. Floppy’s Flophouse. Here some more details.

Mr. Floppy’s Flophouse was a mansion in East Oakland that at one time housed a bordello frequented by writer Jack London. In fact a picture of Mr. London hung behind the elegant long bar. In the early 1990s it was also the home to San Francisco’s most wild underground party and rave. Mr. Floppy himself was said to be an elusive archeologist from Finland who while not excavating an inverted pyramid that is thought to house the knowledge of all mankind, was hosting late night events in the bowels of one of Oakland’s most notorious districts.

The flophouse had around 15-20 different rooms, something different going on in all of them. There was the main ballroom where DJ’s and acts such as Olli Wisdom or Psychic TV would play. Upstairs would be any variety of things to behold ranging from a naked man playing sitar, to freestyle deep house, to a black light mushroom garden paradise.

The only rule was: Don’t do anything to interfere with anyone else’s good time, including your own. Booze flowed from the antique mahogany bar, with guests stayed through the night, and maintaining the correct chemistry was paramount.

At dawn it was not uncommon for George, the owner of the property to appear in a wizard cape serving shrimp cup of noodle soups from behind his piano

I don’t know if we ever go to this place again, but I had amazing night. I was entertained. I had lots of alcohol, and I have overcame my fear of being scared, not totally but just a bit. That’s a good step in the right direction. I did not take any picture, so just this one I’ve found online by Neysa Budzinski. 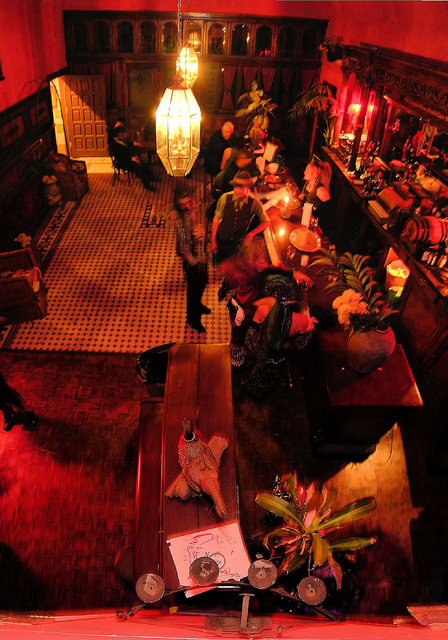